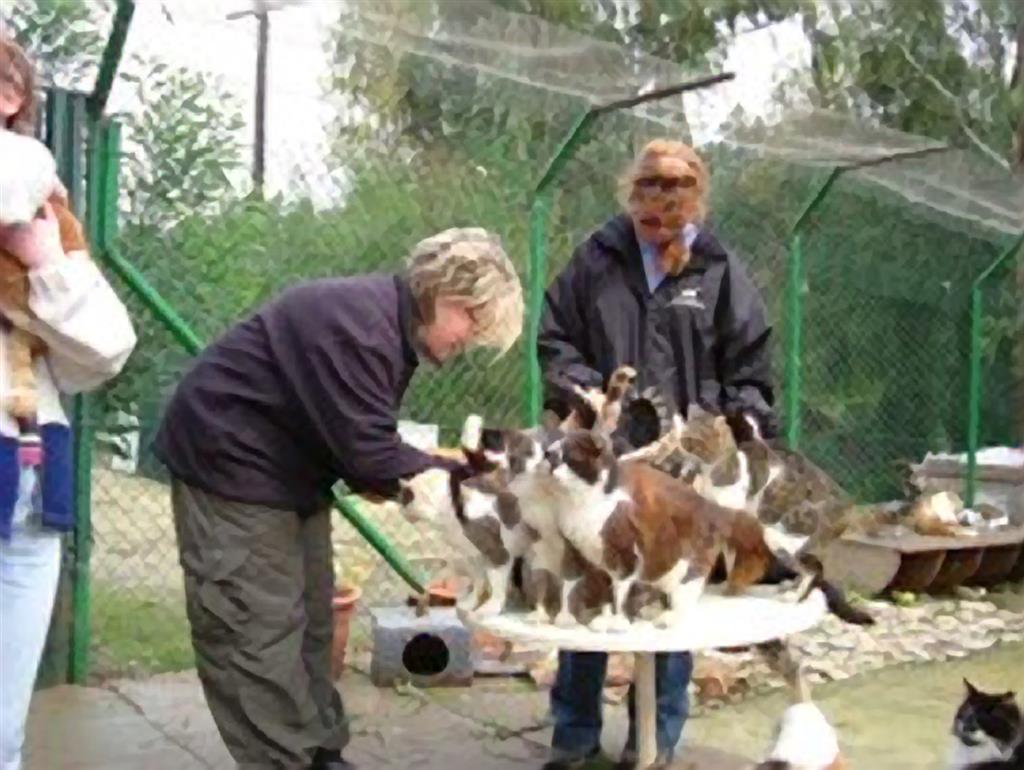 Malcolm?s Cats were honoured with a visit from Sarah Fisher earlier this month. Sarah is the presenter of the UK ITV programme "Talk to the Animals?, in which she solves behavioural problems in animals using a revolutionary new technique called TTouch.

Sarah was originally introduced to the method by her partner Anthony Head, who rose to fame in the will-they-won?t-they Gold Blend coffee adverts in the 1980?s, but is better known as Giles in Buffy The Vampire Slayer. She recently visited the sanctuary with her assistant Tina, and thanks to Yvonne our treasurer for this story.

The visit went very well indeed. Having no idea what to expect we were delighted to find that Sarah and Tina intended to spend the morning with us, and also wished to work with any cats that might be having problems. They spent in excess of three hours at the Sanctuary and were extremely complimentary from the start. Apparently they have never seen so many unstressed and "chilled" cats together in one place before and were astounded at the lack of stress, territorial disputes, unhappiness etc. For what it’s worth, our cats are much happier, in their opinion, than any they have seen in any Cat Sanctuary in the UK – we have of course been telling all the furry inmates how lucky they are since then but that of course has been met with the usual "whatever, now where’s my lunch?"

Sarah was very helpful in providing advice about homeopathic remedies and where to obtain them on-line if we are unable to find them in Cyprus, and was a mine of useful information regarding calming cats down, getting feral cats to adjust their critical distance (posh speak for getting closer!) and how to destress those who were becoming tense. It certainly seemed to work as just a few minutes of tickling one particularly shy cat resulted in said pussy following the afternoon shift around like a little dog – instead of cowering whenever a human came into view.

Russell Fryer, one of the sanctuary helpers was on hand to act as official photographer & produced lots of brilliant photos of the event. Including the photo featured here.

Sarah does not wish to do another Talk to the Animals in the same format but would like to go further afield and filming at the Sanctuary could be a possibility if funding were found by the production company. Another possibility is that she is contemplating a video and book about running a Sanctuary and seemed keen to use us as an example of how it should be done. She also offered to fly to Cyprus with her partner (Anthony Head) and host a fund-raising coffee morning! All very exciting and just for once left me speechless. They also kindly offered to add a link to our website from theirs.

and also on Anthony Head’s