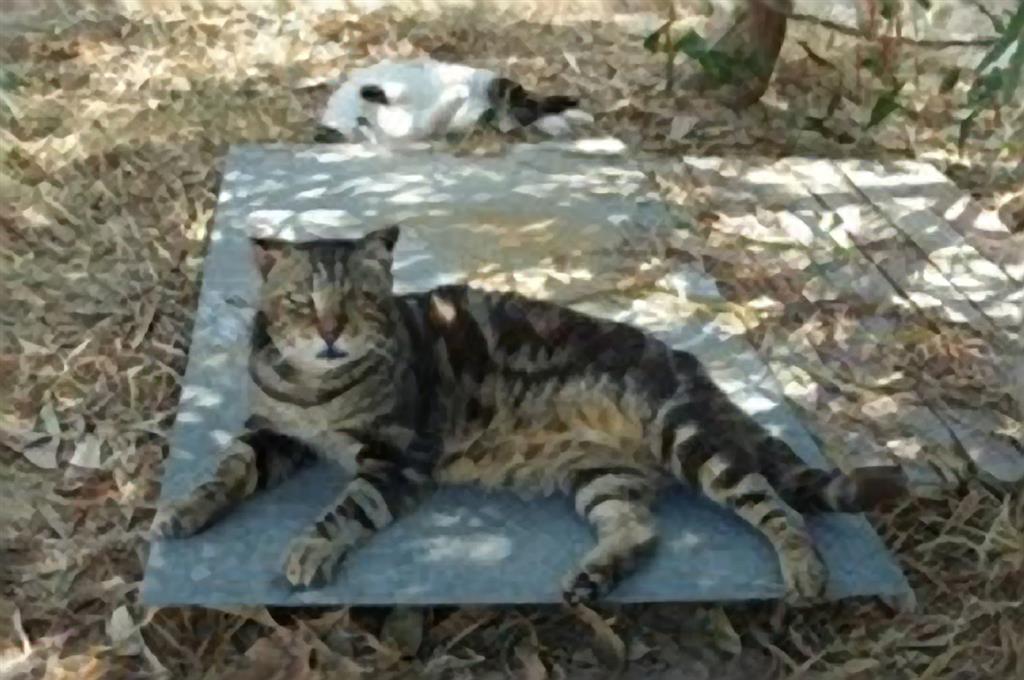 Unfortunately, some bad news to impart and no easy way in which to do it. Horatio, our oldest resident, has passed away and is no longer with us at the Sanctuary. His passing has left a huge gap and it is unlikely that anyone will be able to fill his pawprints in the future.

Horatio had lived at the Sanctuary for almost all of his seventeen years; he was with us as a kitten, a teenager, an adult and finally as the grand old man of the place, watching with disdain as each year?s crop of kittens grew to become disorderly youngsters and always managing to avoid their energetic pursuits.

He was a very loving cat, but always on his own terms and would not stoop to open displays of affection on a regular basis. He was proud and aloof, waiting for you to come to him, but would always reward you with loud purrs and head butts. He made his home to the rear of the Sanctuary, in a shady spot under some trees, and would wait patiently for his meals to be delivered on top of one of the shelters kept there.

Health problems as a young kitten resulted in the removal of one eye but he grew to become a very handsome cat indeed. He was homed, along with his friend Nelson, to a family at RAF Akrotiri and thought he had found the perfect environment in which to live. Unfortunately, marriage problems meant that both cats were returned to us and Horatio never again left the comfort and security of the Sanctuary.

He very nearly found himself a home last year, but we unfortunately had to turn down an offer from a supporter to take him home to the UK. We felt that at seventeen years of age, it would not be in his best interests to have to undergo such a transition, so he continued to spend his time soaking up the sun, avoiding boisterous kittens, and purring contentedly whenever made a fuss of.

Last year saw Horatio undergoing rather more visits to the local vet than he would have liked, but he came through smiling?.. he managed to avoid all the usual sniffles and snuffles prevalent through the winter months but unfortunately was not so lucky when it came to the question of ear-mites. These caused him to shake his head vigorously and, unwittingly, cause himself a bigger problem.

A large lump in his left ear proved to be a cyst requiring surgery. Following his operation he was left with a floppy left ear which gave him a distinctly lop-sided appearance as it matched his missing eye. All was well for a few months when he developed the same problem in his other ear, same diagnosis, same outcome but he now had two floppy ears, which only seemed to add to his charm.

It was at this point that he decided he didn?t much care for the vet and, never having been the easiest of cats to give treatment to, he became even more of an artful dodger, making sure that he could never be found whenever vaccination day loomed.

Horatio, however, became very affectionate and friendly over the past few weeks, approaching visitors and helpers alike for cuddles and head tickles, and was much more visible within the Sanctuary. He seemed to be putting on weight, which we initially thought was a sign of good living, but when he developed a very swollen stomach it was time to take him for another visit to the vet.

Our grand old man of the Sanctuary was diagnosed with a severe heart murmur, kidney problems and atumouron his liver. It was almost as if Horatio had known his final journey was imminent and he had been saying goodbye to all his friends at MCPS (but not, of course, the rowdy brigade in the kitten area) before he had to take his leave of everyone. And take his leave he did??.Horatio was laid to rest on the vet?s family farm last week where he can continue to enjoy the outdoor life he loved so much.

Rest in Peace, Horatio, we miss you.

Thanks to Yvonne for the sad story