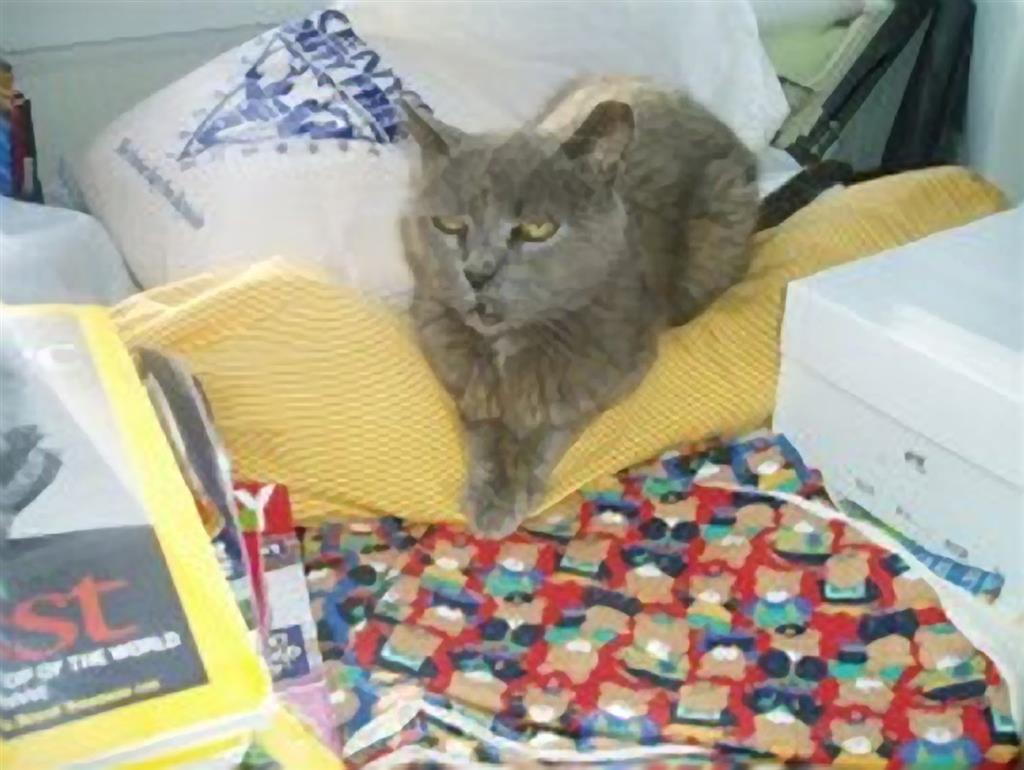 Some bad news to impart and no easy way in which to do it. Gris Gris, our oldest resident, was diagnosed with total renal failure and put to sleep by the Sanctuary vet on Saturday morning. The Sanctuary seems a very lonely place without her, and she is already sorely missed.

Gris Gris was born in the boot of Malcolm Stevenson’s car twenty-six years ago and remained at the Sanctuary for the whole of her life. It could be said that Gris Gris had never had a proper home, but she had a home in the hearts of literally hundreds of helpers and visitors, and made the Sanctuary her very own within a short time of arriving. She was indisputably the Queen of MCPS, and although one of the smallest cats we had, was one of the biggest in terms of presence.

She responded to her name, made her demands known in a very vocal manner, and generally twisted everybody she came into contact with around her little paw. In best female tradition, she shaved two years from her age before we cottoned on to that particular ruse, and was never short of a purr or two whenever she was given any attention. She didn’t have a cross word for the helpers, but wasn?t hesitant about putting uppity youngsters in their place, and could still show a nifty turn of speed whenever extra treats were on offer, racing around the worktops in the kitchen like someone several years younger.

The grand old lady of the Sanctuary, she had visited the vet more this past winter than in the whole of her previous years ? she found the winter months to be rather hard last time around and was given weekly vitamin injections to help her through the rain and damp that typified last winter. She perked up considerably in Spring, and spent most days lying in the sun gathering energy for her regular forays to the kitchen where she demanded to be let in, immediately if you please, and fed choice titbits.

The past few weeks, however, saw a marked change in Gris Gris and it was obvious that she was losing weight, and was not as active as had once been. She found it difficult to retain food long enough to derive the appropriate nourishment from it, and was content to spend more and more of her time asleep in her own special bed in the warm kitchen. It was as if she was ready for her next journey, and the vet confirmed that it was time for her to go this morning.

Gris Gris departed on a bright sunny day, and before life became too painful and unbearable for her. She went to sleep very peacefully and has been brought home to the Sanctuary in order to sleep forever in her kingdom. She has been laid to rest under a large shady tree and a small memorial is planned to allow all her subjects, both human and furry, to pay their respects whenever they care to. A kind and loving little cat, she brought tremendous joy and wonder to all who knew her, and the Sanctuary will seem a very strange place without her. She loved the sun, and the only home she ever knew – now she has both for all eternity. God Bless, Gris Gris, and thank you for allowing us to know you.